24feb4:00 pmM Talks: Smashing the Patriarchy: A Conversation Among Women 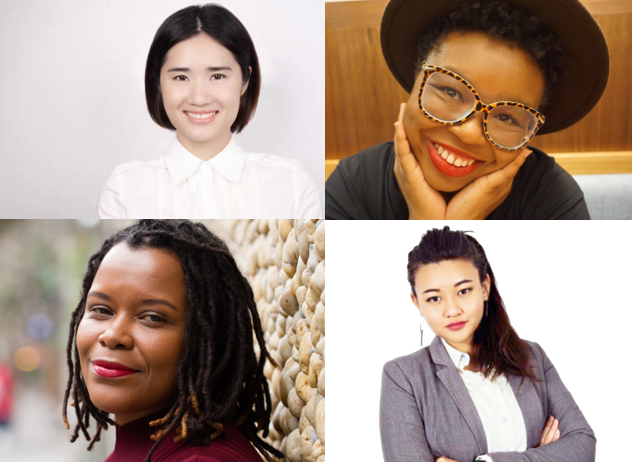 Host of the podcast, Unchained. Unbothered., Keturah Kendrick brings together artists and activists, Lilian Shen, Niesha Davis and Xu Fei to discuss their work to dismantle rigid gender roles and the limitations they place on women around the world. The women discuss the importance of the #metoo movement and how they have been impacted by its reach, creating lives that exist outside of what is expected of them as young women and how they see the work they do as instrumental in changing the narrative of how women are “supposed” to navigate the world.  This engaging discussion will offer unique insights as the four women discuss how the political can never be separated from the personal.

Host of the groundbreaking podcast, Unchained. Unbothered., Keturah Kendrick fancies herself the Ambassador of Freedom for the 21st century woman. She sees it as her mission to convince women across the globe that they are enough for themselves. In addition to featuring globally-minded women who choose non-traditional paths on her show, she has written about the triumphs and challenges of living out loud while female on her own blog, Yet Another Single Gal, and for numerous publications such as Single Girls Rock, Non Parents, The Unfit Christian and The Not Mom. She regularly writes for Medium.com and her first book, No Thanks: Black, Female, and Living in the Martyr-Free Zone, will be published in June.

Lilian Shen
Lilian Shen is the co-founder of Queer Talks and Women Up!, both founded in 2015. Queer Talks is a bi-weekly, bilingual discussion-based event that discusses queer-related issues in China. Women Up! focuses on raising awareness on gender-based violence through events like panels and workshops. Lilian is also a member of TransTalks and ShanghaiPRIDE. TransTalks is Shanghai’s first trans-focused organization founded in 2017, dedicated to regular offline events for community building, as well as trans rights advocacy and basic on-the-ground crisis intervention. By profession, Lilian is the Managing Director of Zmack Improvisational Theater where she is an improv coach and an applied improvisation corporate trainer, specializing in Diversity & Inclusion, cross-functional collaboration and communications.

Fei Xu
Fei Xu is an advocator of equality. She is one of the organizers behind Ladyfest Shanghai – a grassroots, not-for-profit festival where women take the central stage to promote dialogues of gender equality and to voice the diverse experiences of an individual through music, arts, workshops, performance, exhibitions and all that jazz. She is a Charleston dancer featuring new women of 1920s, who won the right to vote and broke free from the restrictions of the Victorian age. She is a sister with an academic and professional background in psychology and market research, who believes in fighting for those who cannot.

Niesha Davis
Originally from Cleveland, Ohio, USA, Niesha is a writer, editor and avid traveler. Working primarily at the intersections of feminism, queer issues, race, and the personal narrative, she has written for: Bust, Bitch, The Establishment, Sixth Tone, Women’s Health, Lenny Letter, and many other publications. As a commentator, she has been featured on The Sixth Tone podcast as well as Al Jazeera’s The Stream. She is the woman behind Brown and Abroad, a travel and lifestyle blog dedicated to informing and inspiring women of color who live abroad or travel extensively.