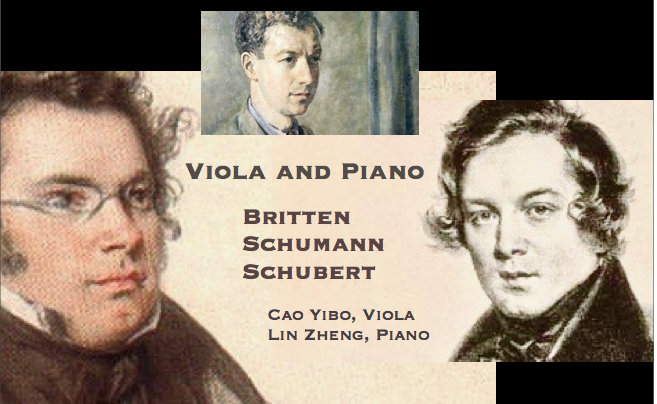 On January 28th, 2018 we will hear three masterpieces for viola, two with piano accompaniment, by Benjamin Britten, Robert Schumann and Franz Schubert.

Although the viola has been around in some form virtually as long as its string siblings, the violin and the cello, it was only in the 19th Century and especially in the 20th Century that the viola was increasingly seen for its potential as a solo instrument. Up to then, the instrument was mainly used in musical ensembles to provide inner harmonic voicings emerging only occasionally for brief moments of solo lines. It was with Berlioz’s Harold in Italy (1834), commissioned for orchestra and viola by none other than Paganini, did the viola start to be consistently seen as a solo instrument in its own right. Schumann’s Märchenbilder that we will hear on the 28th of January is one of the most important viola solo masterpieces to be written in the 19th Century and helped to further cement the viola’s role as a full-fledged solo instrument.

The first piece we will hear is the last movement, Ciaconna or Chaconne, of Benjamin Britten’s Second Suite for solo Cello. It is frequently played on the viola as well. Britten (1913-1976) , one of the giants of 20th Century music, is mainly known today as an opera composer and he is the most frequently performed opera composer born in the 20th Century. But he was a prolific composer in many kinds of music whether it be orchestral, choral or chamber. He wrote his three solo cello suites for his close friend Mstislav Rostropovich in the 1960s and early 1970s. The Ciaconna movement which we will hear takes a respectful glance back to its Bach predecessor while clearly being a work of the 20th Century. The chaconne dance form, by the way, appears to have originated in the New World, made it way to Spain as a sprightly dance, but had morphed into a slow, serious form in three beats by the time Bach and contemporaries wrote them in the 18th Century.

Robert Schumann (1810-1856) was often inspired by childhood for his compositions. His piano suites Kinderszenen (Scenes for Childhood) and his Album for the Young are perhaps the most famous. Toward the end of his composing career he wrote two suites inspired by fairy tales: Märchenerzälungen (Fairy Tales) in 1853 for viola, clarinet and piano and Märchenbilder (Scenes from Fairy Tales) in 1851 which we will hear in our concert. On the printed score Schumann does not tell us which fairy tales he is writing about, but from his personal correspondence we learn that the first two movements of Märchenbilder relate to Rapunzel, the third movement to Rumpelstiltskin and the fourth to Sleeping Beauty. Schumann likely leaves this information off the score so that we concentrate more on the pure music rather than trying to guess the underlying narrative.

Franz Schubert (1797-1828) wrote his Sonata in a minor opus 821 for the then recently invented instrument, the arpeggione, a six-string fretted instrument that looked something like a cross between a cello and a guitar. By the time the sonata was published posthumously in 1871 the arpeggione was long out of fashion and the sonata has generally been played by cello or viola, although it has been arranged for flute and other instruments. The sonata is one of the most beloved of all Schubert sonatas. It is easy to see why being packed with melodies of great pathos that Schubert is known for. When he wrote the sonata in 1824 he was already aware that due to his health each year left to him was a gift. Even in happier moments of his music we get a sense that he is conveying, “This is how it could have been, but this is how it is”. Schubert seemed to accept his fate of a short life not with only bitter sweetness but more with a profound and humble sense of acceptance, reconciliation. Ironically my favorite cello recording of the Arpeggione Sonata is by Rostropovich and Benjamin Britten whose music and influence started off our program today!

Please come to Glam on January 28th to hear this wonderful program. It will be played by Cao Yibo the violist of the award winning Song Quartet, which we have heard several times at Glam, and by Professor of Piano, Zheng Lin from the Shanghai Conservatory. See you on the 28th! 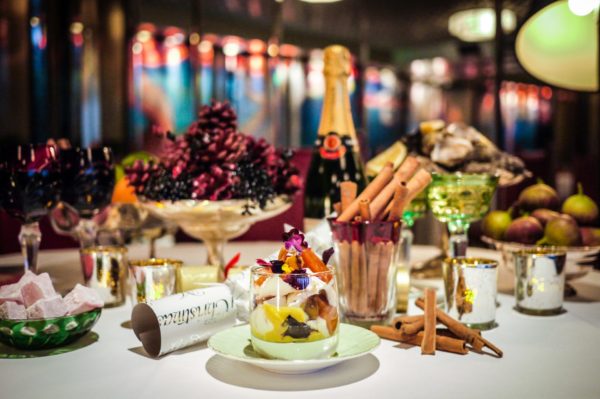 Whatever You’re Celebrating…Celebrate at M!

Whatever You’re Celebrating…Celebrate at M!