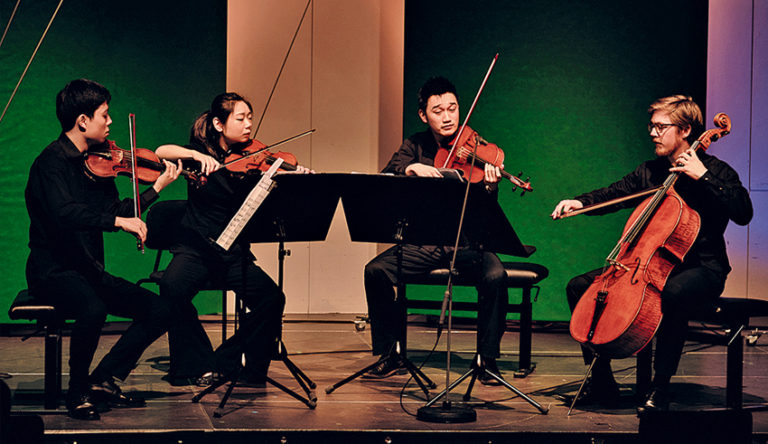 It is with great excitement that we welcome back the Simply Quartet to M on the Bund.

The quartet was founded in 2008 under the tutelage of Jensen Lam. The Crystal Room Chamber Music Series was their first performance home! They won first place in the 2009 Shanghai Chamber Music Competition and since then the Simply Quartet has–well simply–not looked back.  After going off to Vienna to study at the famed University of Music and Performing Arts, they have won numerous prizes in prestigious string quartet competitions including, most recently, the First Prize in the Franz Schubert Competition this past February in Austria.  I am sure the entire Shanghai Chamber Music Lovers community will want to be at Glam to proudly welcome home these incredibly talented and now duly recognized musicians!

I am always happy when I learn that the program for the next concert will give us an opportunity to compare two composers in such a way that will help us to have deeper insights into chamber music.  May 13 has such a program.  We have our old friend, Josef Haydn, the Father of the string quartet, with his Opus 74 number one written in 1793 when Haydn was 61 years old.  He wrote this opus after his first trip to London where he heard his quartets played in a large concert setting rather than in an intimate room.  The work is therefore more “orchestral” to fill the larger space and was premiered on his return to London at Hanover Square in 1794.  As always with Haydn, there are delightful surprises and we will discuss those before the concert in May.

While Haydn is viewed as the quintessential composer of the Classical era, Robert Schumann is often referred to as the quintessential early romantic composer, more concerned with emotional yearning rather than classical restraint and balance.  In his early piano music he eschews the classical forms of Haydn, Mozart and Beethoven and draws from literature and song cycles to create large scale works made of up smaller song like pieces but which hold together in an overall cohesive framework.  These works represented a truly revolutionary change in music history.

It is therefor a little surprising that in the early 1840s, after years of writing avant-garde piano pieces and songs, Schumann tried his hand at writing symphonies and chamber music in more or less the mold of the earlier Classical composers.  String quartets by that time would have been seen as historical yet highly respected musical forms – and writing them would be a bit like modernist poets trying their hand at writing, say, sonnets.  We might understand Schumann’s change partly by the fact that his father-in-law was a very conservative musical pedagogue and tended to look down on Robert’s compositions.  Also times were a-changing and there was a revisionist sentiment in the air pushing against what were seen as the excesses of earlier Romanticism. Schumann was also increasingly suffering from the depression that in ten years would force him to have himself committed to an asylum.  In any event, Schumann wrote a string of chamber masterpieces during this time including his three string quartets and his famous piano quintet and piano quartet.  Romantic composers generally stepped carefully into the earlier classical world due to the enormous shadow cast by Beethoven and we can find echos of his work–along with hints of our Haydn and Mozart–in the Schumann’s third string quartet that we will hear in our program.

So please come and welcome home the Simply Quartet and hear this wonderful program that they have prepared especially for us!