With the Chinese New Year holiday coming up, it’s a great time to grab a book and get excited for the 2020 Shanghai International Literary Festival. Preview the authors we have in store for this year and cozy up with one (or a few) of their books:

For the history buffs…

Katya Knyazeva – SHANGHAI OLD TOWN: THE WALLED CITY. Knyazeva takes a stroll back in time on the streets of old Shanghai and tells the stories of the city’s former inhabitants. 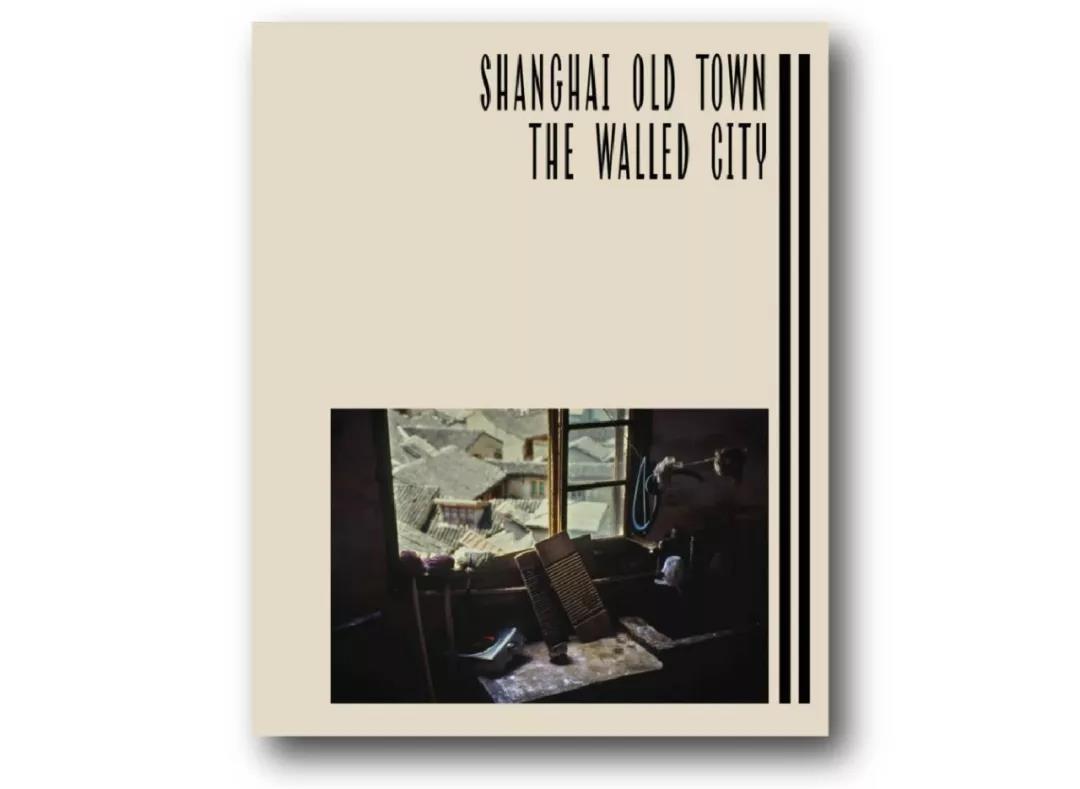 Chen Qiufan (Stanley Chen) – THE WASTE TIDE. An environmental dystopian sci-fi, Chen’s book centers on electronic waste recycling, in a landscape he based on real experiences from his hometown in Shantou, Guangdong. Themes of class struggle, bioweapons, and waste fill the novel. 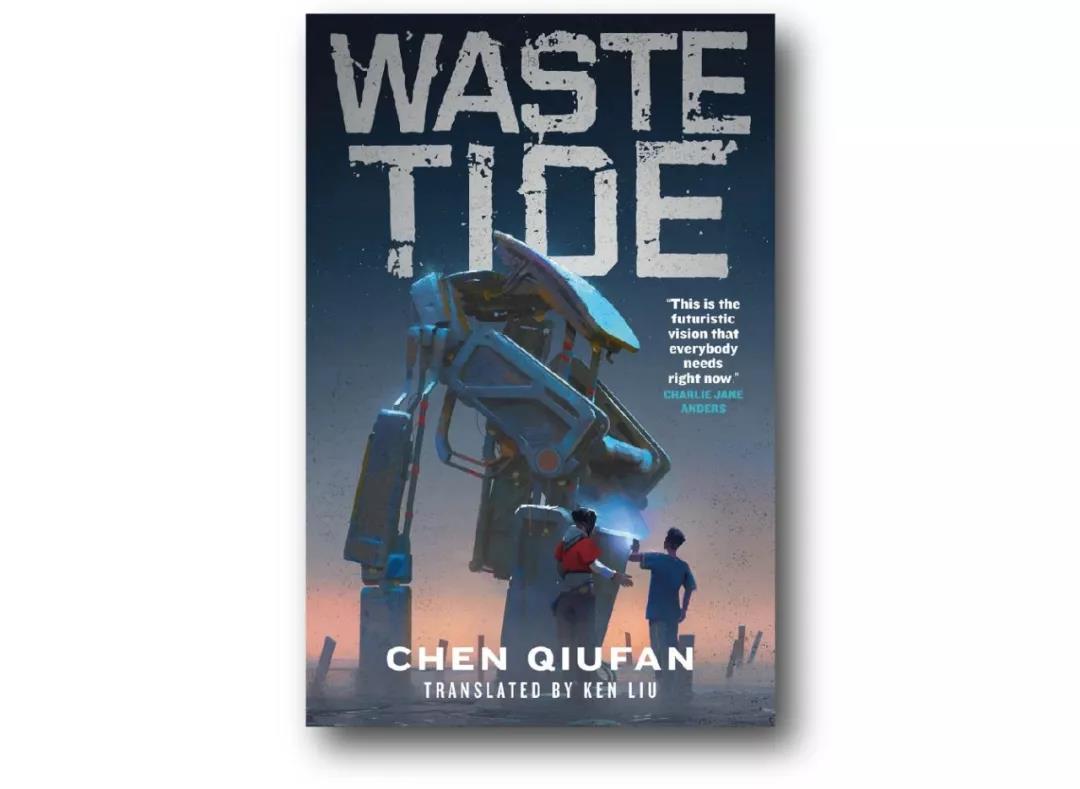 For those with an aesthetic eye…

Kassia St. Clair – THE SECRET LIVES OF COLOR. Dive into the history, symbolism, and significance of colors. St. Clair explains the importance color has to humans. 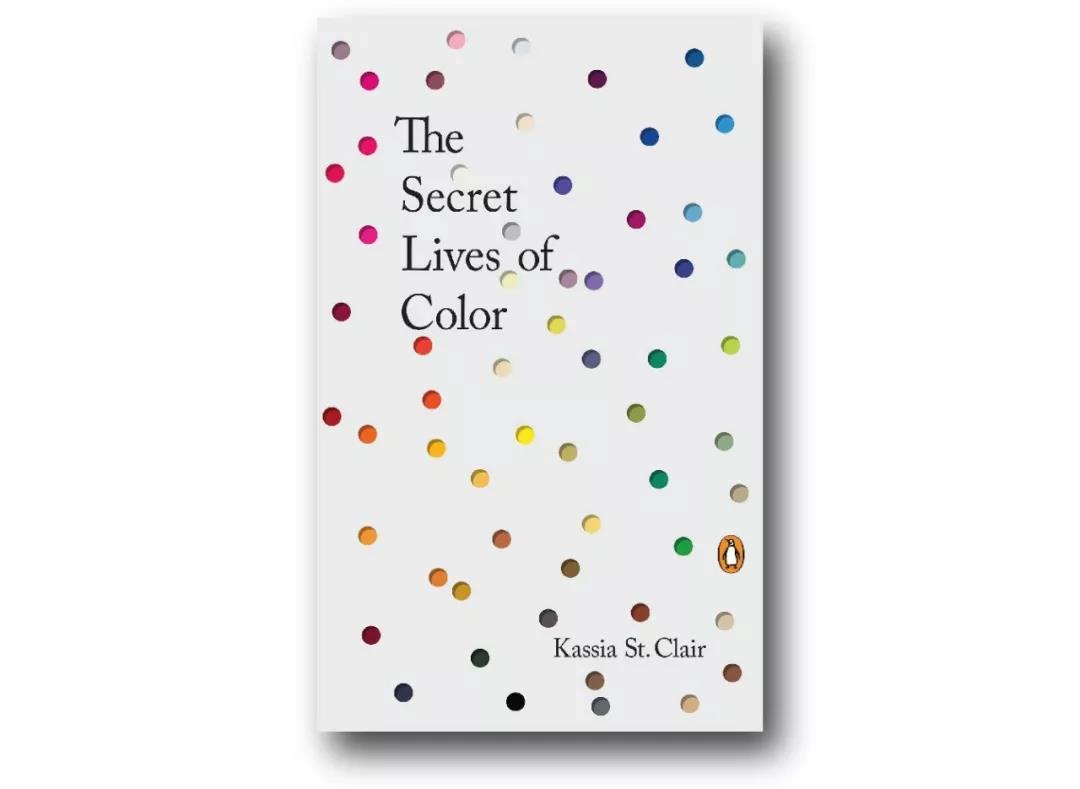 For those who cross cultures…

Elisa Shua Dusapin – THE PACHINKO MARBLES. Shua Dusapin is of Korean and French decent, and uses her international perspective in her award winning prose. 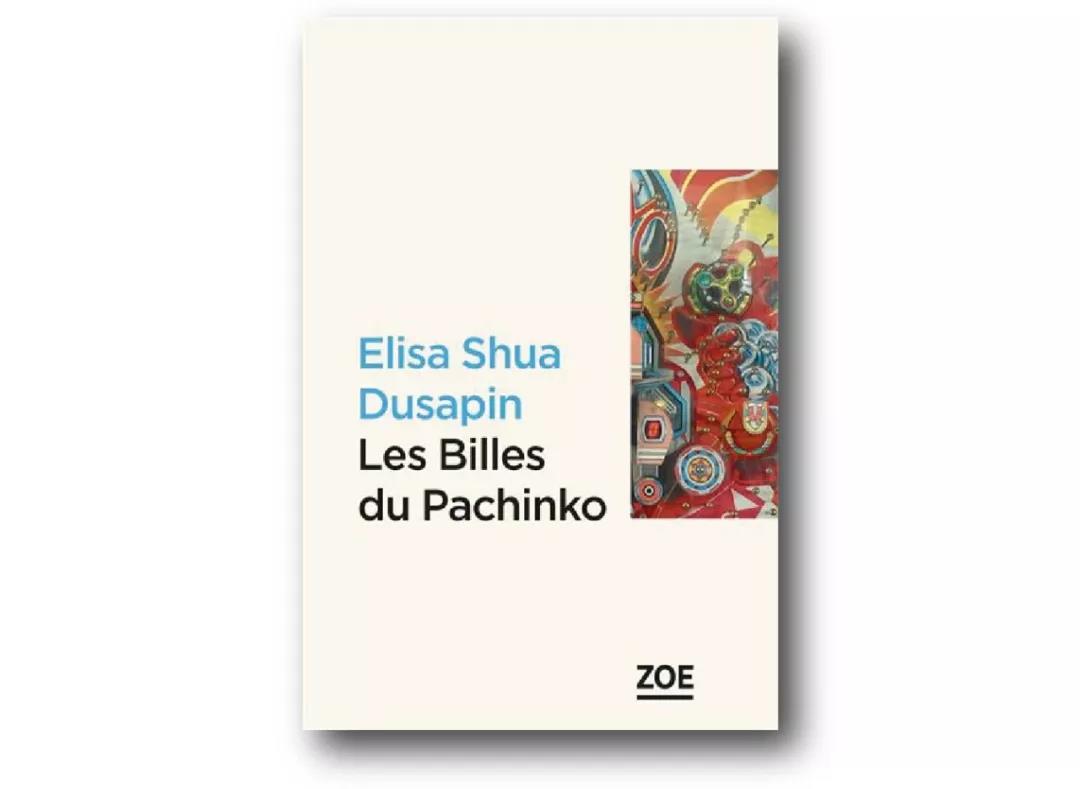 For the ones who love BAIJIU…

Derek Sandhaus – BAIJIU: THE ESSENTIAL GUIDE TO CHINESE SPIRITS. As the educational director of Ming River Baijiu, Sandhaus has the tough job of sipping and savoring local spirits to become an expert on China’s much-loved national drink, Baijiu. The world’s most consumed alcohol has never looked so exciting, as we are introduced to the development and birth of grain-based alcohol. 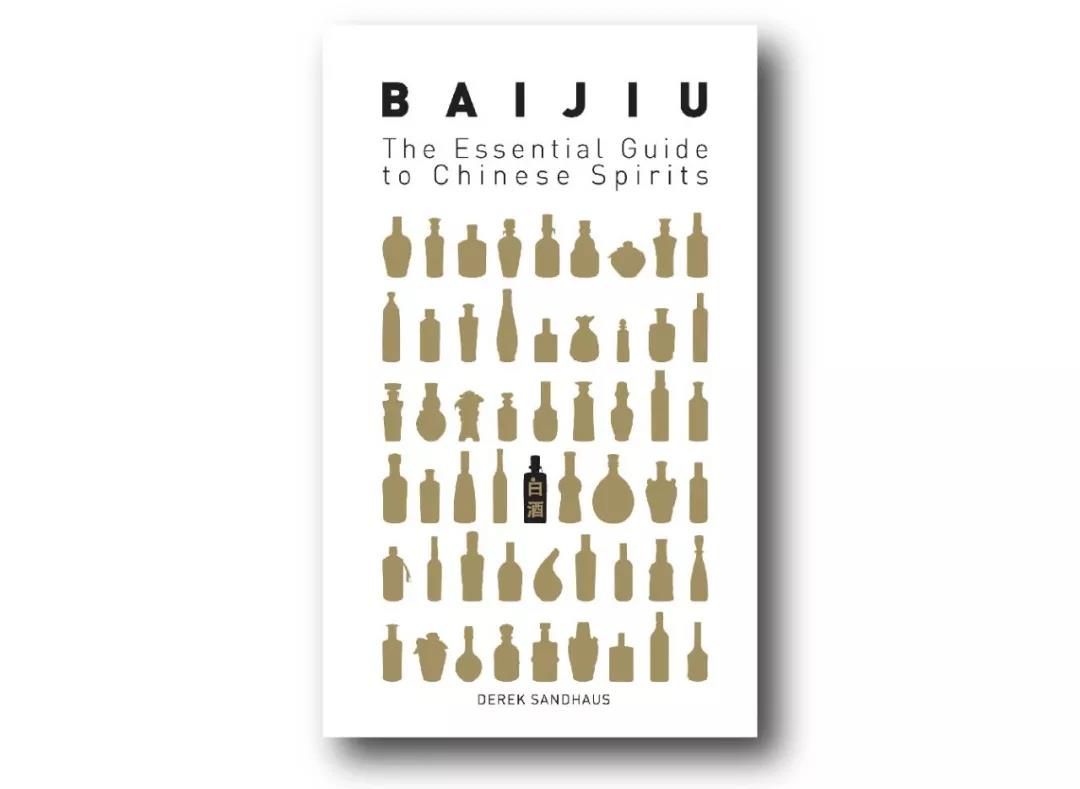 For people who love dinosaurs…

Michael Benton – THE DINOSAURS REDISCOVERED. Benton shares the leaps in paleontology that have brought us closer than ever to the creatures that once ruled the Earth. 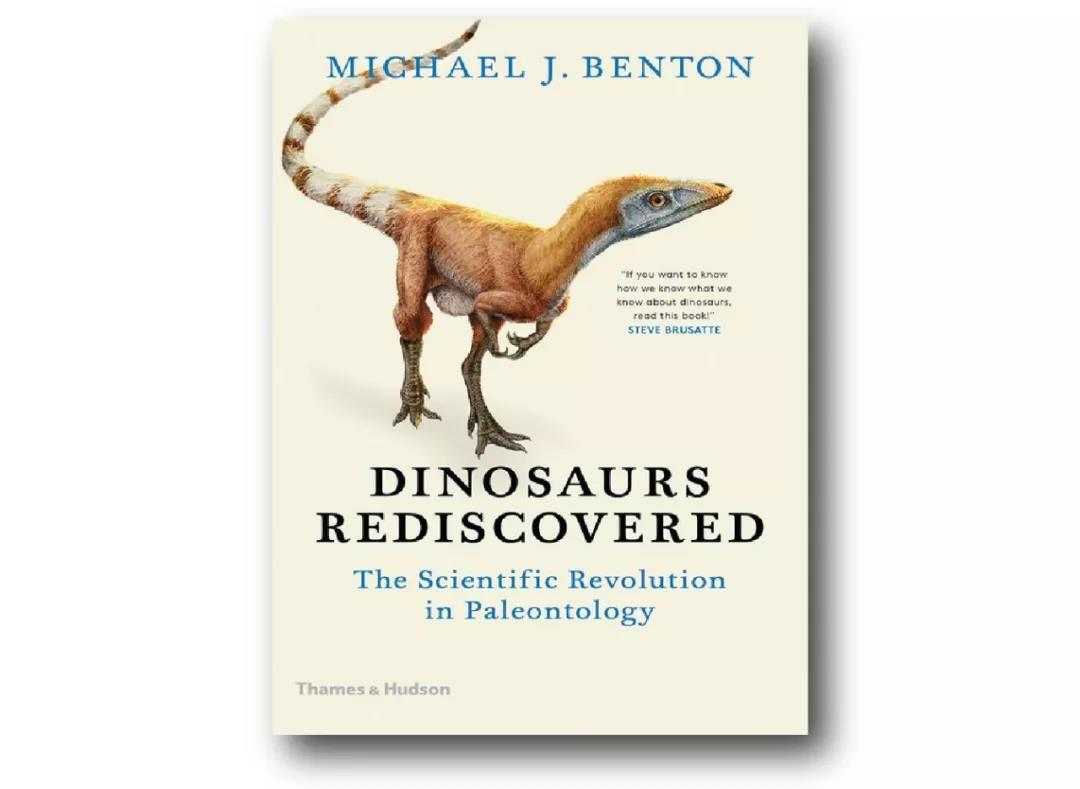 The full programme will be released on February 15th and tickets will be exclusively sold on our website. Our headliner sessions move fast so make sure to bookmark the ones you’re dying to see and act quickly once tickets go on sale. 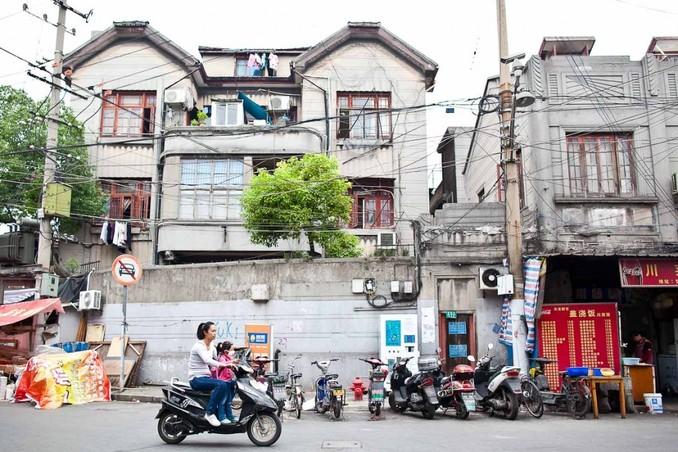 What secrets and stories of the past does Shanghai have written down for its attentive readers? What handwriting practices survive in the city which seemingly turns towards digital writing? Chinese script is known to accompany paintings, but in fact it tends to accompany in different forms many human creations, serving a number of purposes from informative to magical or decorative. This richly illustrated talk forms an attempt to look more closely at the fascinating connection between the city and writing practices, shaping its look, identity and daily life inside the lanes. It is a celebration of Shanghai urban space maintaining multilayered traces of various hopes and experiences, both in messages provided by the authorities and bottom-up expression of anonymous inhabitants. It is a combination of a broader overview of endangered urban writing practices in Shanghai and more thorough analysis of few of them, to provide insights and inspiration for those bound to Chinese script by passion and creative work.

Karolina Pawlik is an anthropologist, art historian and a poet, who is currently Postdoctoral Fellow at the University of Southern California’s and Jiaotong University’s joint Institute of Cultural and Creative Industry. She has been based in Shanghai since 2012, teaching at L’école de design Nantes-Atlantique, Jiaotong University, the ESSCA School of Management, and L’école de Communication Visuelle. Main areas of research and interest include: visual modernism in Shanghai, evolution of writing practices in the 20th and 21st centuries, and transcultural design. She holds a PhD in Cultural Studies from the University of Silesia. 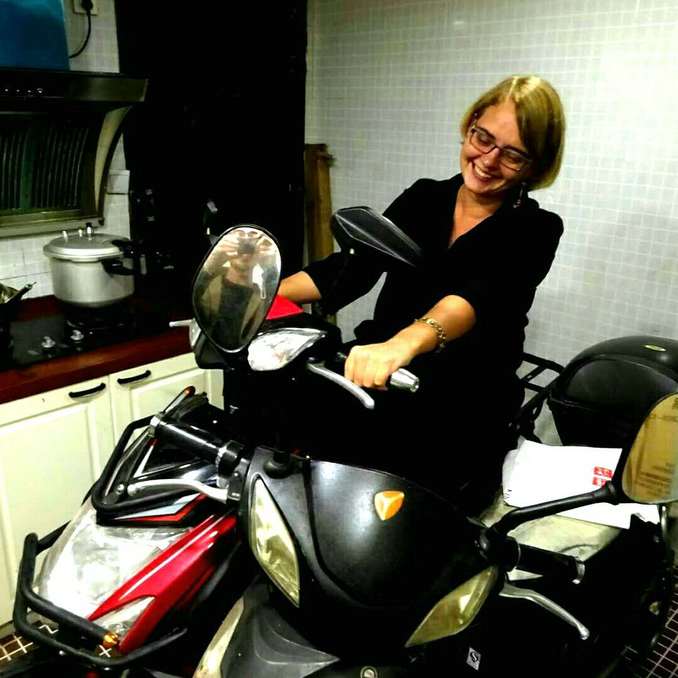 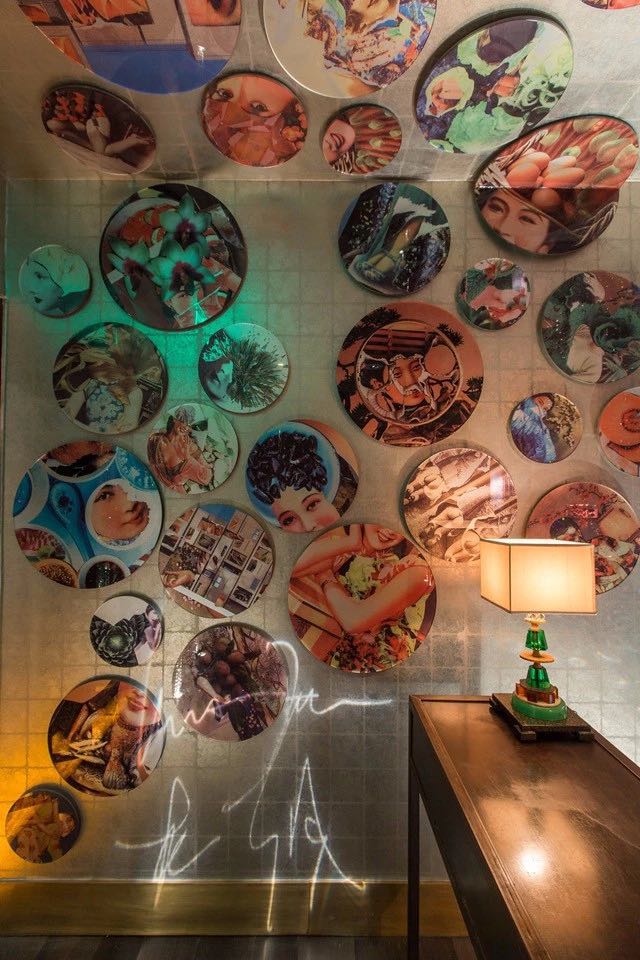 After a massively successful collaboration with Suzhou Cobblers in 2016, we are thrilled that Denise Huang is joining us again with another exciting range of limited edition shoes & bags inspired by one of Glams  favourites, Christopher Doyle. The Wall at Glam will display Suzhou Cobblers creative designs until the end of this year. 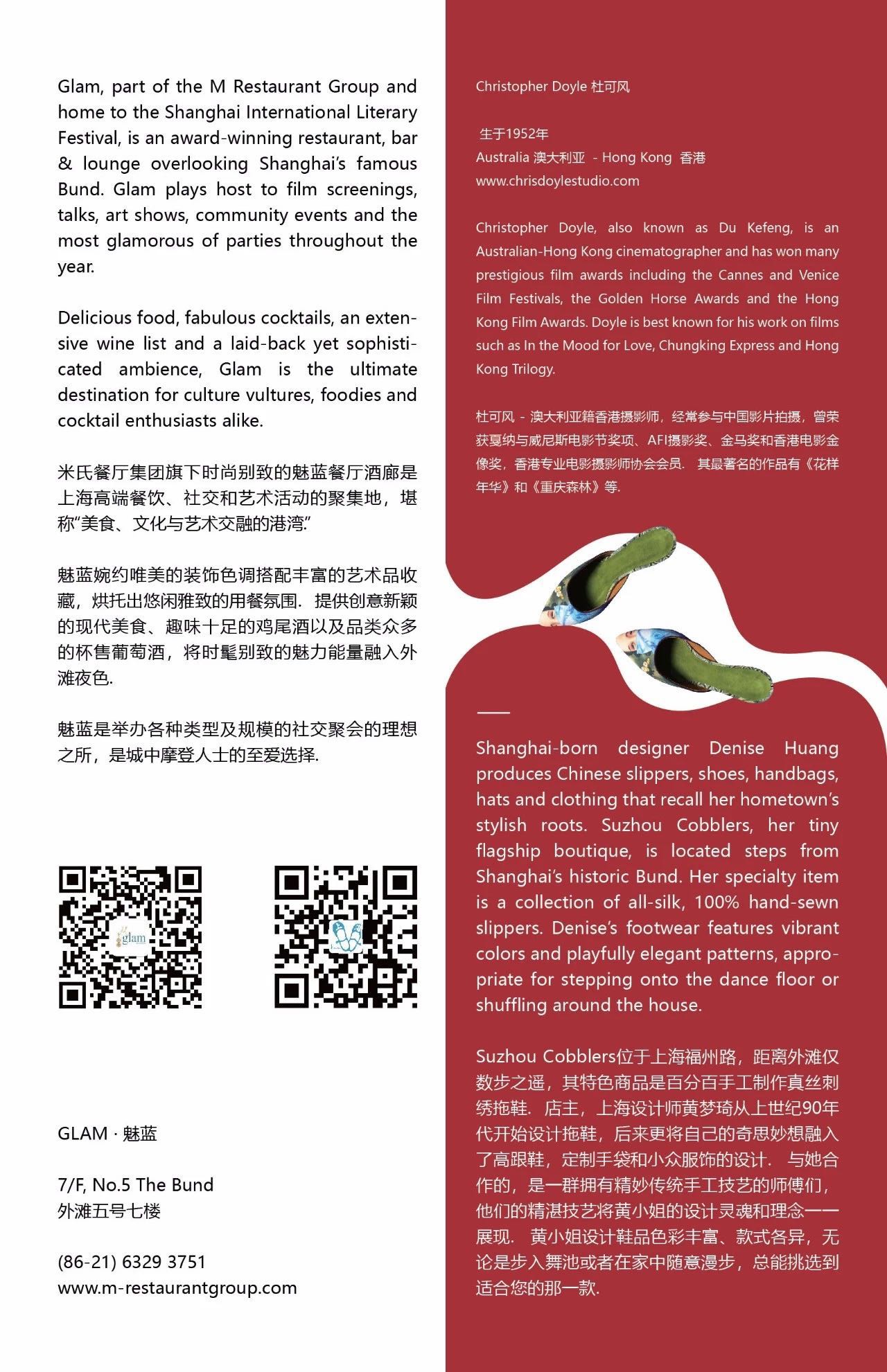 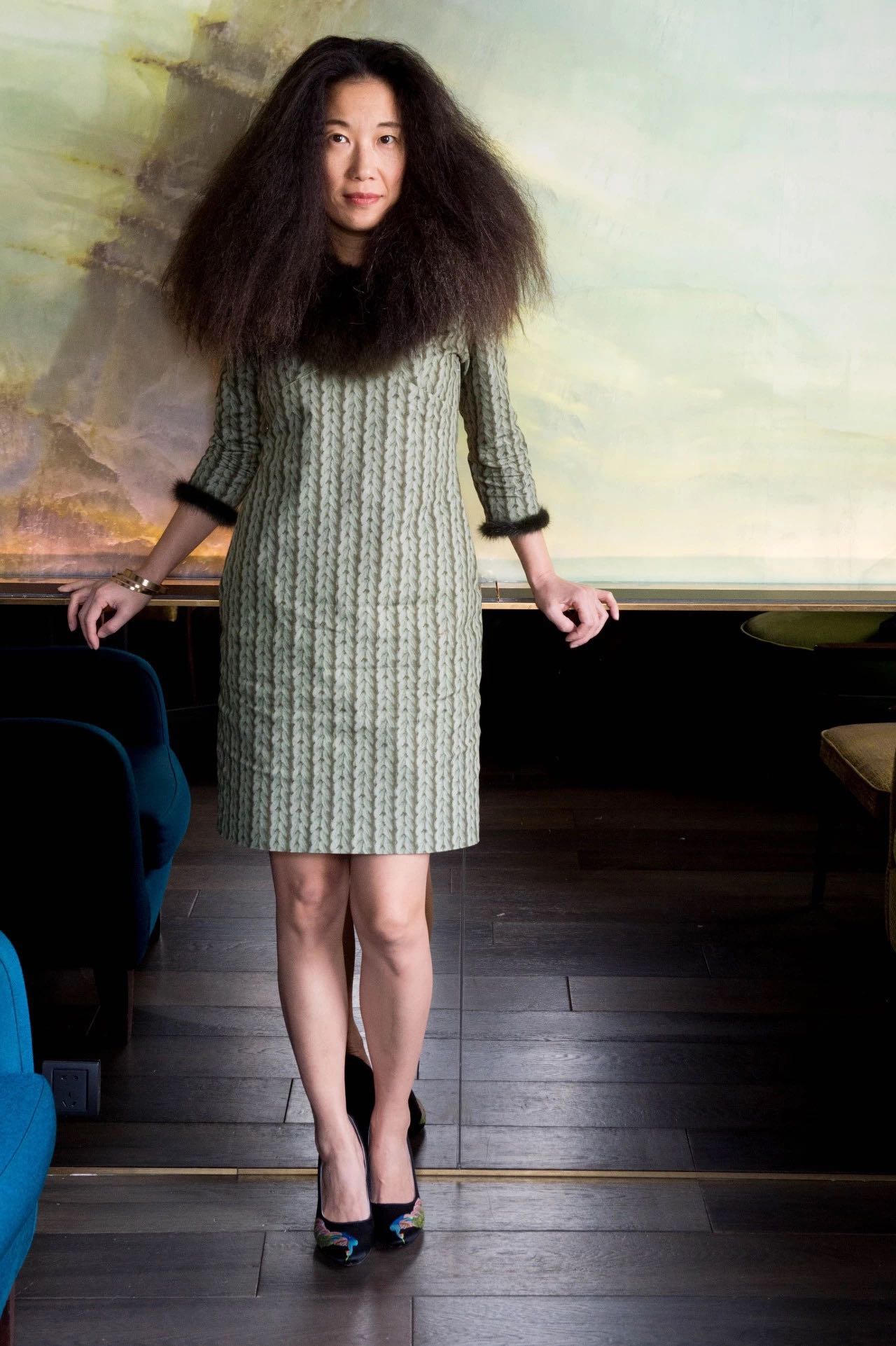 Perhaps best known for his work on films like “In the Mood for Love,” artist and cinematographer, Christopher Doyle, has been an inspiration for Suzhou Cobblers designs for many years. When GLAM offered me the chance to incorporate his work into designs for my handbags and shoes, I jumped at the opportunity. It is an honor and a pleasure to embrace this challenge.

The Glam Girls that welcome guests at the entrance are at once beautiful and whimsical. A gorgeous lady’s hair is replaced with mussels; a Qipao is filled out by a salad of vegetables. Such rich and colorful imagery creates a world of possibility… one I look forward to sharing with everyone at the opening party on November 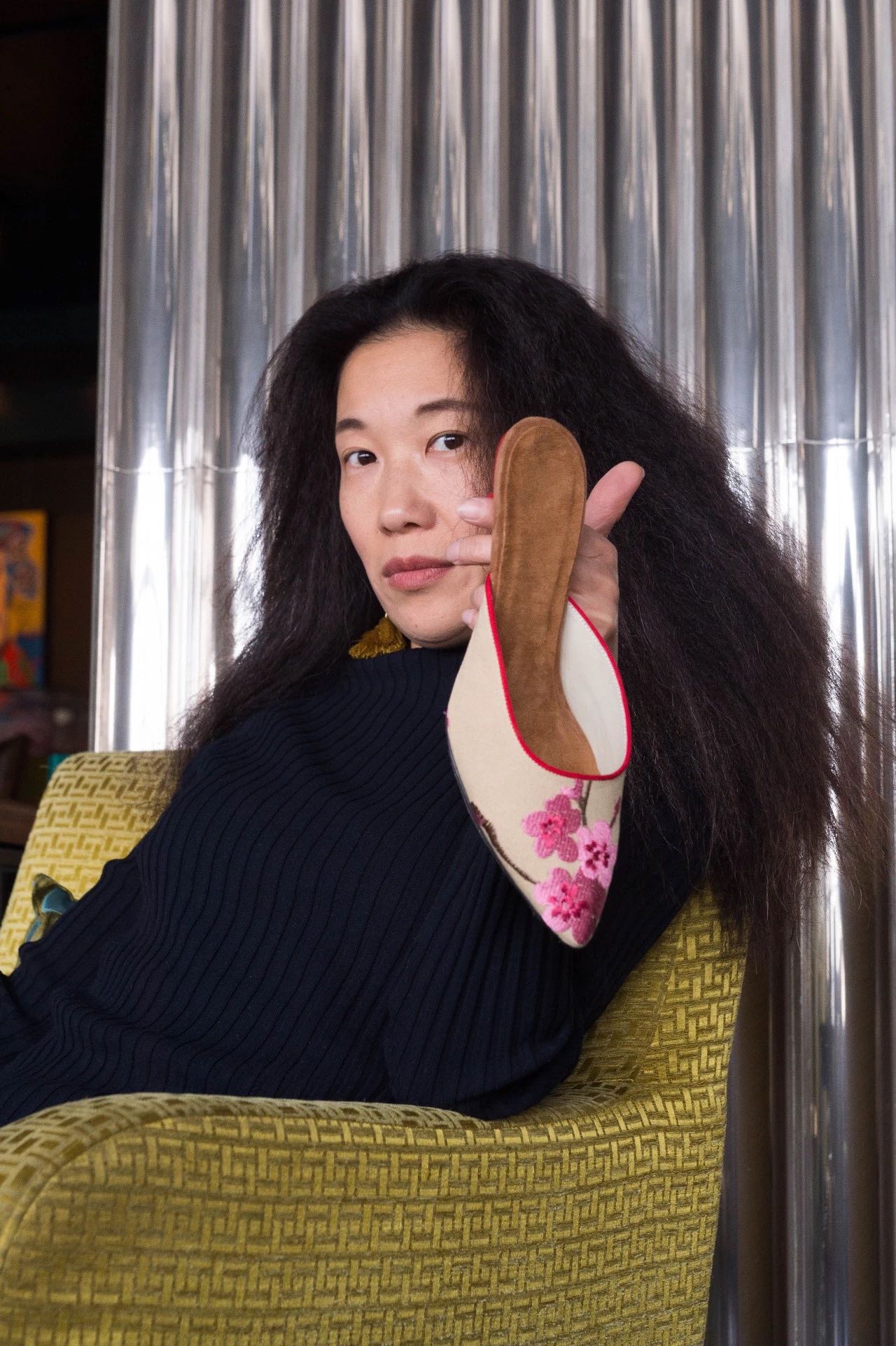 The hand-made shoes and handbags displayed on ‘The Wall at Glam’ are very unique and all specially produced with material by Waste2Wear. Shanghai-based Waste2Wear makes environmentally friendly fabrics from plastic bottles. https://www.waste2wear.com/news 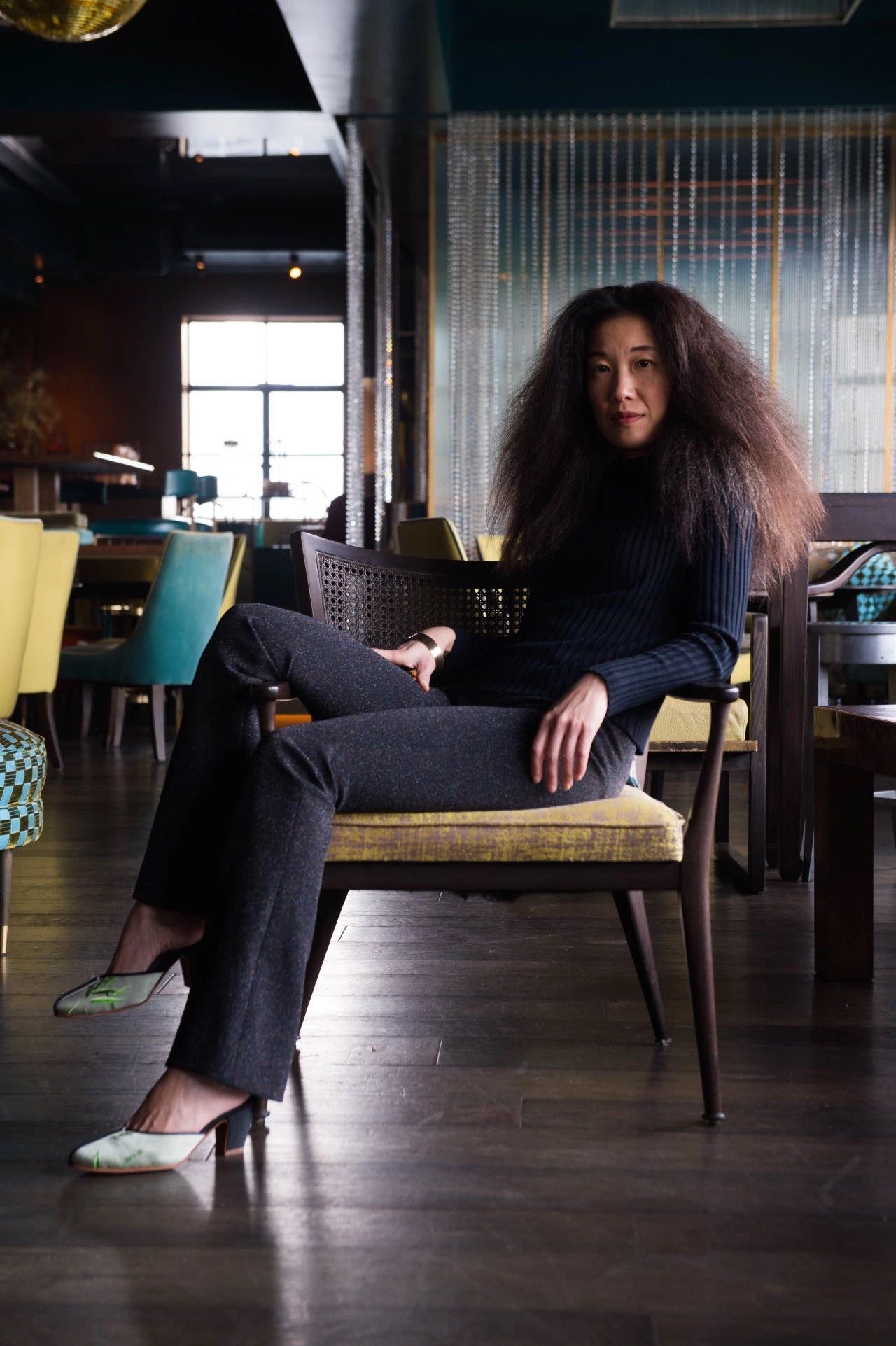 We will set up a small pop-up shop in our glamorous private room & will be selling a limited supply of the bags and shoes from this line. We look forward to seeing you all at the launch party, if you don’t come you might just miss out! 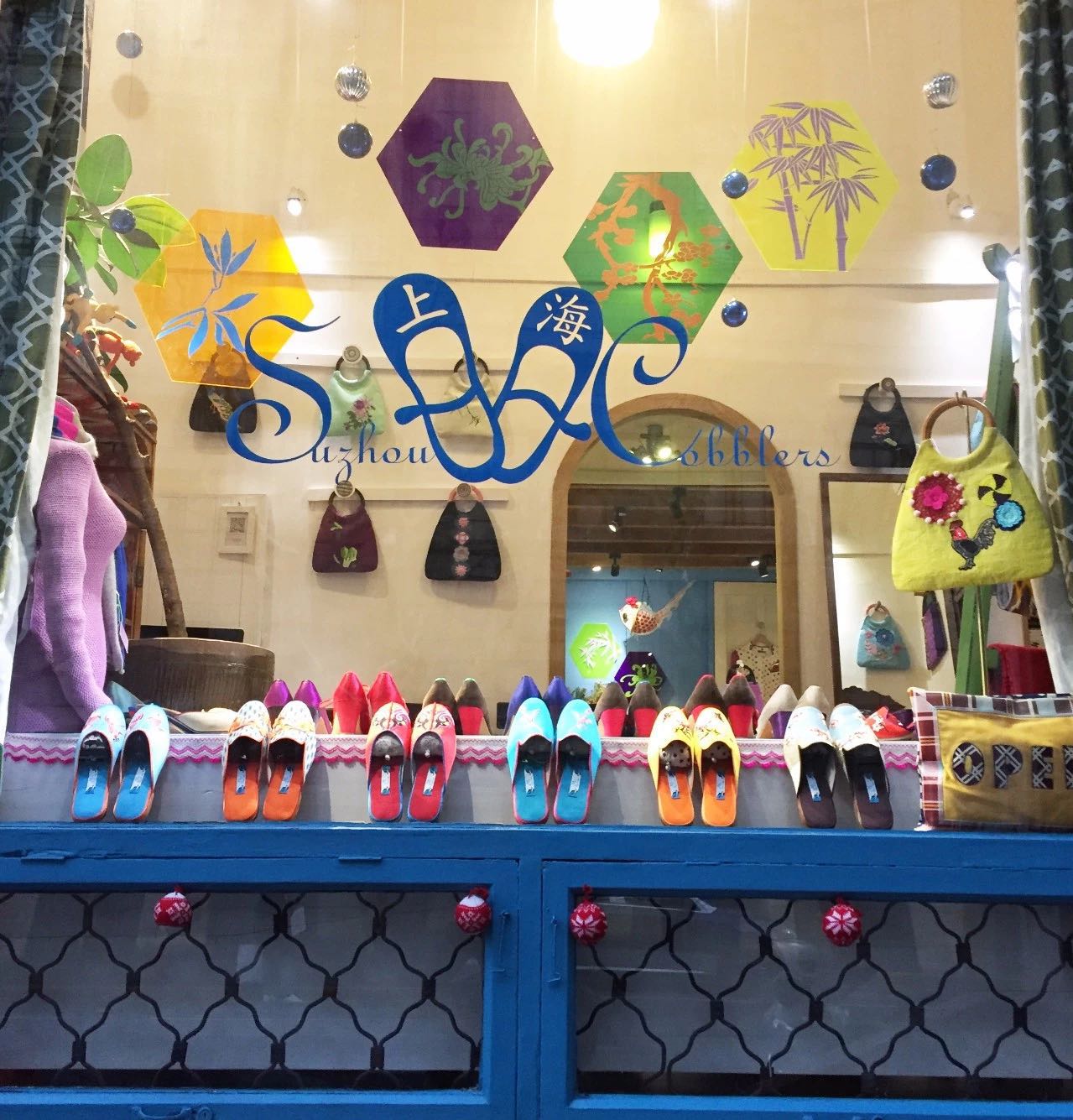 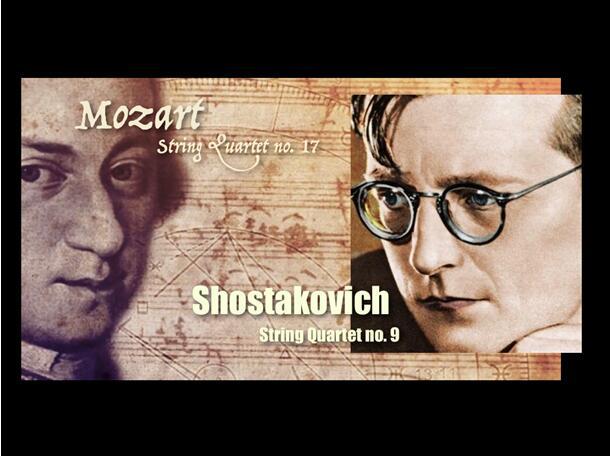 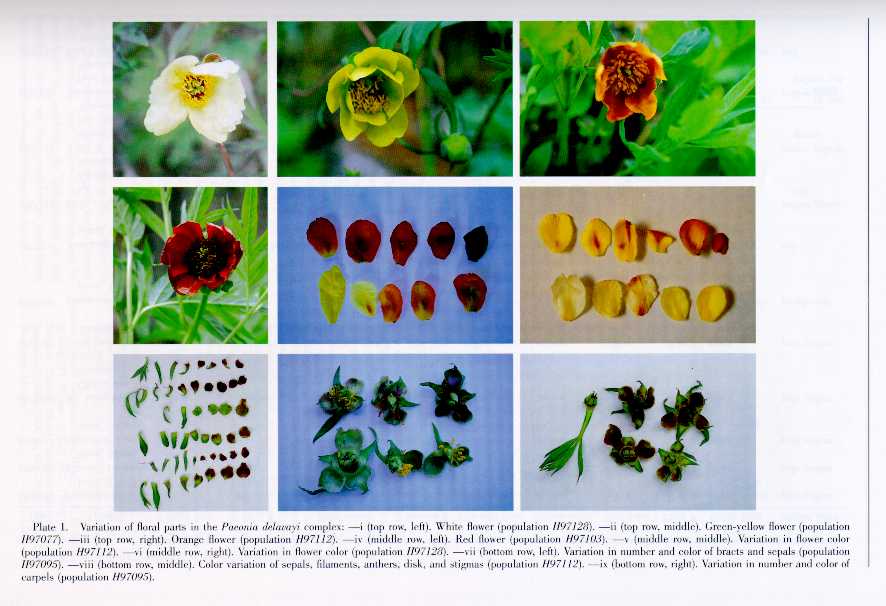 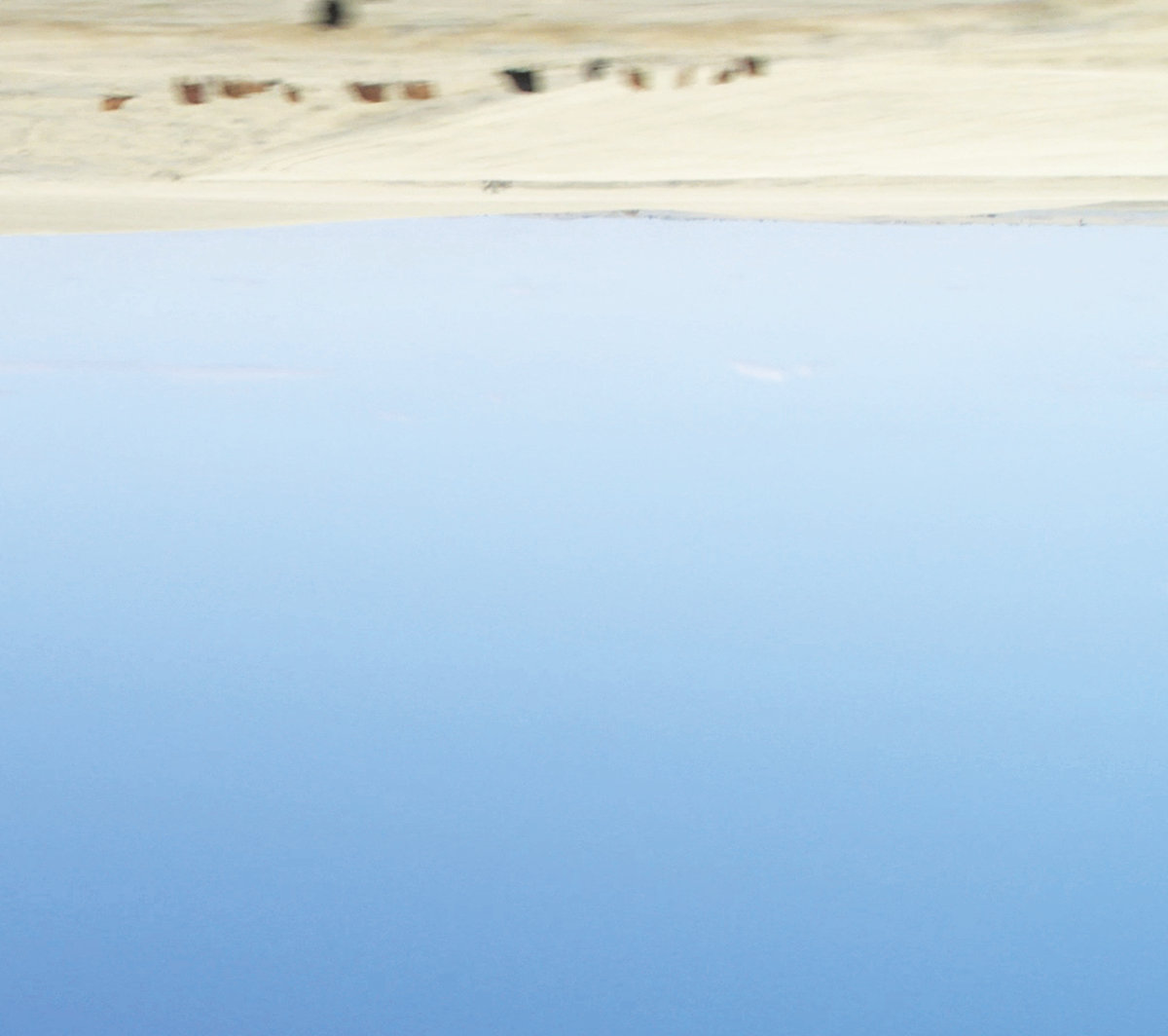 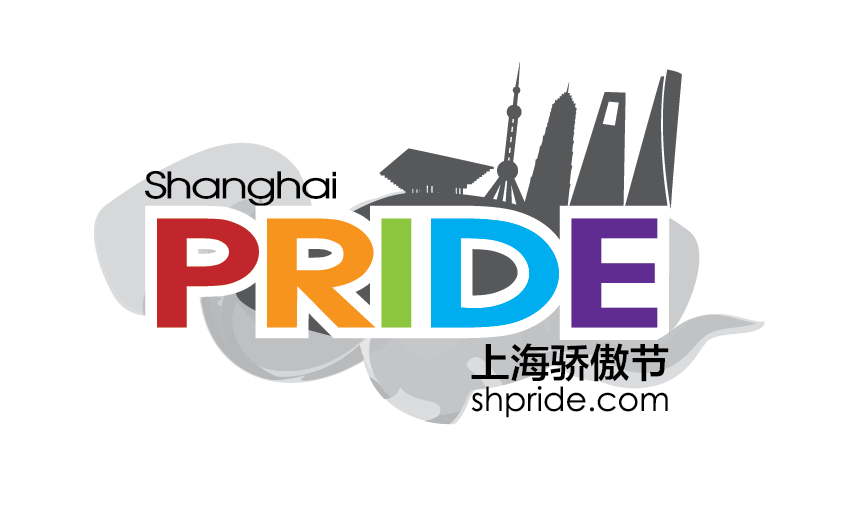